Located in the heart of Kraków’s Old Town is Milkbar Tomasza, a modern interpretation of a Soviet-style milk bar. A milk bar or bar mleczny is a Polish cafeteria ubiquitous across Poland. The main purpose of a milk bar was to serve cheap meals to poor citizens. Dishes included dairy products, traditional Polish dishes, and pierogi (dumplings).

After World War I, these self-service milk bars started to pop up all across the country. Many opened after World War 2 and throughout the Cold War era (1947 to 1989). But, with the collapse of the communist bloc, most milk bars closed after going bankrupt.

Around 2010, Poland saw a resurgence of milk bars. These small and inexpensive restaurants were popular with those with nostalgia for the past, especially with the communist period.

If you are looking for more information about Poland, I highly recommend you pick up a guidebook such as The Rough Guide to Poland

When you think of a Soviet-style milk bar, you probably think of a no-frills restaurant with a plain and dreary interior. Milkbar Tomasza was not your typical milk bar. The interior was modern, chic, and inviting. You had black and white checkered floors, bright green accents, a white ceiling, and brick walls. This was something I was not expecting for a milk bar.

Though small, the dining room was bright thanks to the ample lighting and large front windows which allowed natural light in during the day. The room was quiet except for the sounds of the kitchen along with music playing lightly in the background

As mentioned before, the open dining room was small. With limited space, tables were packed tightly together around the room wherever there was space. At the center of the room was a large communal table, perfect for small groups and solo diners. When it gets busy during lunch and dinner, you might have to wait for a table to open up.

Being a self-service restaurant, I had to grab a menu from the front counter before finding an open seat. Once I looked over the menu, I returned to the counter to place my order. After paying, I returned to my table where I waited for my food to be delivered. With food prepared fresh to order, wait times were anywhere from 15 to 30 minutes.

The menu at Milkbar Tomasza was much larger than I was expecting. There was a wide variety of dishes including traditional Polish dishes such as pierogi (dumplings). But, you also had a large selection of all day breakfast dishes, paninis, and main courses. The menu also featured a Daily Special (Zestaw Dnia). This special, priced at 20 zł (or about $4.94), included a main course and soup of the day

When I think of traditional Polish dishes, the last thing that comes to mind is an Irish Breakfast (25 zł or about $6.14). Since I was in the mood for breakfast, and I was hungry, I decided to give it a try. This dish was served with two fried sausages, bacon, two eggs, tomato, potato wedges, baked beans, toast, and butter.

When placed in front of me, the first thing that caught my attention was how large the plate was. I was glad I was hungry. Also, it was colorful and beautifully plated.

There were two types of meat, bacon and fried sausages. The bacon was not your typical bacon. It was more like ham both in appearance and taste. The salty and smoky bacon had a tender yet meaty texture after sliced thin and grilled to perfection.

While simple, I enjoyed the tender and moist beans. They were cooked to perfection with a meaty texture but not to the point of falling apart. The beans were sweet and smoky like traditional baked beans.

Hidden under the baked beans, and slice of tomato, were two fried eggs. Both eggs, crispy on the bottom, were cooked differently. One was cooked sunny side up. The other cooked over hard with no runny yolk. While I would have preferred a runnier yolk, the eggs tasted fresh and delicious, so no complaints from me.

Finishing off this breakfast were two slices of white bread and large potato wedges. The thin slices of toasted bread were simple, but the rich, soft butter made each slice taste great. As for the potato wedges, they weren’t crispy nor soggy, but just right. They did taste fresh cut so that was a plus.

While the Irish Breakfast was the most expensive item on the menu at Milkbar Tomasza, I would recommend it for those who are hungry and want something different than Polish food. I enjoyed how the flavors, textures, and colors of each component complemented each other.

Meatballs with Mushroom Sauce, Potatoes, and Side Salads

As with the Irish Breakfast, this dish was colorful and plated well. On the left, you had a trio of julienned Side Salads. The crisp white cabbage had a light, refreshing taste with a hint of acid, probably from vinegar. The carrots were sweet and earthy with a crunchy, tender bite. By far, my favorite salad had to be the beets. The bright deep purple color was beautiful. The tender beets were sour, sweet, and salty. They were delicious and made me realize that I actually enjoyed eating beets. Who would have thought?

In the center of the plate were medium sized meatballs smothered in a mushroom cream sauce. The mushroom sauce was thick, reminding me of beef stroganoff. Mixed into the hearty, delicious sauce were mushrooms, diced peppers, celery, carrots, and red bell peppers. These additions added a crunchy texture, complementing the otherwise soft meatballs. As for the meatballs, on their own they weren’t very moist but not dry either. This is where the mushroom sauce played an important role. The sauce not only made the meatballs taste better but added moisture to each bite.

The final component of the dish were simple sliced potatoes topped with sliced scallions. Each potato was tender and filling, as expected. And, a quick dip in the mushroom sauce elevated the taste of the otherwise basic potatoes.

Since I ordered the daily special, I had the option of two soups. I settled on the Minestrone Soup with Noodles.

Packed inside this homemade, hearty soup were thin, tender noodles and a generous assortment of vegetables. Vegetables included tomatoes, onions, carrots, potatoes, mushrooms, cauliflower, squash, and basil. Each vegetable was tender to the point of falling apart. I enjoyed the flavors and textures of each spoonful.

The light, fragrant broth was just as impressive. It tasted as it had been simmering for hours, soaking up all the flavors of the vegetables and herbs. The depth of flavors of the broth, especially the tomatoes and aromatic basil, could be tasted in each bite.

While simple, this flavorful minestrone soup had it all. It was a meal in itself.

For a self-service restaurant, I was expecting the service to be non-existent or lacking. But, this was not the case. I found the staff at Milkbar Tomasza to be friendly while service was efficient. And, food arrived quicker than anticipated. Finally, I appreciated how tables were cleaned promptly after one guest left to ensure the wait was never too long.

Milkbar Tomasza is a modern interpretation of a traditional, self-service, Soviet-style Polish milk bar from past times. What you will find here is classic Polish fare and international dishes. And, not only does the food taste great, but it’s affordable. If you are looking for a unique dining experience in Kraków, which won’t break the bank, then Milkbar Tomasza is a great choice. I can’t wait to return to try some of the other items on the menu. 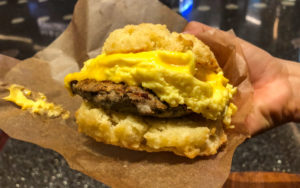 One Day In Kraków: 17 Things To Do With 24 Hours In Kraków 17 things to do in Kazimierz, Kraków's Historic Jewish district