Day 1: My journey from Los Angeles to Copenhagen, Denmark 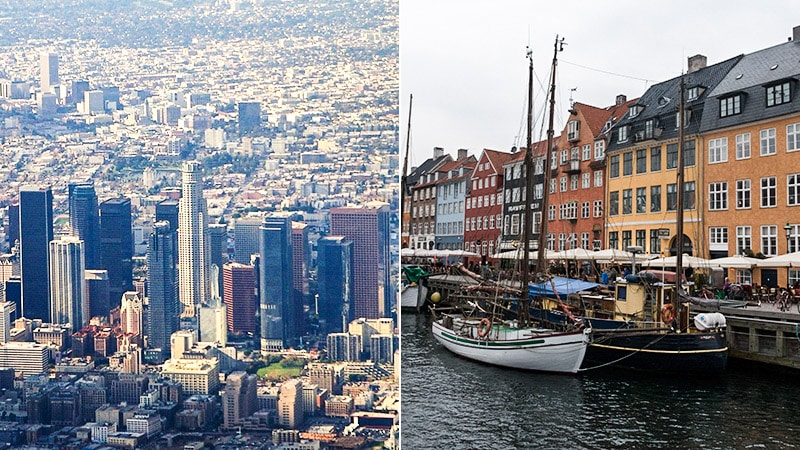 My journey from Los Angeles, California to Copenhagen, Denmark

The start of a new adventure to Copenhagen, Denmark and Stockholm, Sweden.

This multi-day post will recap my journey along the way. Flights, hotels, transportation, food, and more. I will try my best to document it all, from the highs to the lows.

The story begins at LAX. Driving into LAX at sunset

Every time I drive into LAX, I get excited.

I know it’s the start of a new journey. New experiences, new places, new people, new foods, and another stamp in the passport.

This is why I love to travel so much. The whole journey is like a puzzle that somehow comes together in just the right way. In the past few years, Tom Bradley International Terminal has been renovated and expanded.

The new terminal was beautiful. Making things better was the security line which was quick and efficient. It took no longer than 15 minutes to check-in and make it past security.

With new shops and restaurants, the remodeled terminal has made LAX a world class airport. LAX now competes with some of the best and busiest airports in the world.

A sandwich at Ink Sack Having some time to burn before my flight, I decided to check out the food options in the terminal.

Since I knew I wouldn’t be getting a meal on my flight to Copenhagen, I thought it would be a good idea to eat before the flight. With Norwegian Air, you have to pay for food, so plan accordingly or bring your own food and drinks on board.

In the mood for a sandwich, I stumbled across Ink Sack. This small food counter offered an assortment of interesting sandwiches including Cold Fried Chicken, Banh Mi, Turkey Melt, Reuben, Pastrami, Cuban, and Corned Beef & Egg.

Order at the counter, pay for the food, and then pick up your sandwich when it’s ready.

For me, I took the advice of the cashier and went with the Chorizo, Egg, & Cheese Sandwich ($6.99). Other than chorizo, egg, and cheese, the sandwich had jalapenos, coriander, tomato, and mayonnaise.

For the price, the sandwich was great. Sliced chorizo, a large fluffy egg, fresh sliced jalapenos, and veggies all covered in cheese and placed inside a crispy artisan bread.

Fueled up on food, I was ready for the flight. When I arrived at my gate, I was surprised to see people already waiting in line to board the plane.

Since Norwegian Air charged for both checked and carry-on luggage, most people just checked their luggage in. With most bags checked-in, overhead space was virtually empty. So, I had no idea why people waited in line for over 30 minutes to board.

Another Norwegian Air requirement was that carry-on luggage had to be under a certain weight. Unfortunately, my bag was overweight which required me to check it in.

With my luggage checked and my seat assigned, I had no reason to board early. I waited until the last moment possible to board. Waiting to board last gave me a few more minutes of freedom to stretch my legs and body before I had to sit for over 10 hours. Finally, I made it on board Norwegian Air Flight 7092 with non-stop service from Los Angeles, California to Copenhagen, Denmark.

If you guessed that a seat reservation also came at a cost, then you guessed right. On my flight, if you wanted to select a seat, you would have had to shell out 33 euros a way. If you choose not to pay for a seat, you will be assigned a seat at check-in.

Since I was traveling alone, I chose to gamble and have my seat assigned for me at check-in. Luckily, I received an aisle seat.

Stuck on a 10 hour flight to Europe, I was happy that Norwegian Air offered a great variety of free entertainment for passengers.

At every seat was a personal entertainment system with a touch screen. The system was filled with hours of entertainment including new and classic movies, television shows, documentaries, music, and more.

Watching a few movies helped the flight pass by much quicker than it actually was. Long-haul flights without personal televisions at every seat are never fun. Fancy map on the entertainment system

Other than movies and television shows, I spent a decent amount of time messing around with the cool interactive map that took advantage of the touch screen.

You could spin, zoom in, and manipulate the map however you liked. You could view multiple maps with different angles of your current location in the world.

Other than maps, there was information about the flight including the time to destination, elevation, and airspeed. A USB plug was found at each seat

Just below the television screen was a USB power slot that was perfect for charging small electronics, music players, and phones.

For long flights, having USB power is a must. I was able to listen to music for the entire flight and even better, I had a fully charged phone when I landed in Copenhagen.

In economy, there were two power plugs for every three seats. These plugs were great for recharging laptops and other electronics that needed a little more than USB power. After 10 hours and 12 minutes, I finally touched down in Copenhagen.

It was rainy and cold, but I was excited to start a new adventure in a new amazing country. Inside Terminal 3, just prior to passing through customs and immigration

After a long flight across the Atlantic, the last thing I wanted to see was a long line for customs. Unfortunately, this was exactly what I was greeted with. Dejected, I walked over and joined the lengthy line.

To my surprise, just after I joined the line, a new line opened up and I was able to walk right on through customs in only a few minutes. First stamp in the new passport

Copenhagen Airport. The first stamp in my new passport.

Always remember to sign your new passport. The customs agent gave me some grief for not signing my new passport. Rookie move on my part.

After passing through customs, I was excited to finally be in Copenhagen, Denmark. Catching the train from Copenhagen Airport to central station

If you are trying to reach the city center of Copenhagen from Copenhagen Airport, then you are in luck.

Tickets for the train, metro, and bus can be easily purchased at ticket machines at baggage claim and inside Terminal 3. These machines only accepted debit cards with pin. I tried to use my credit card, but it was declined. If you have any problems, you can stop by the DSB ticket counter inside Terminal 3.

Since I needed to reach Copenhagen Central Station, I purchased a ticket for the train. A train directly connects the airport and the central station in under 15 minutes. After a quick train ride, and only 3 stops, I reached Copenhagen Central Station.

This beautiful station, the largest in Denmark, opened in 1911.

If you have extra time, be sure to walk around the main area and outside the station. The architecture of the station along with the beautiful facade outside is worth a quick look for any visitor to Copenhagen. After hours of traveling, I finally made it to my hotel, the Cabinn City Hotel.

If you weren’t aware, Copenhagen is an extremely expensive city. For the price of $65 a night, I think I scored a great deal on the Cabinn City Hotel. The hotel is located about 5 minutes from the central station while only a 10 minute walk from the major city sights.

The rooms might have been small with bunk beds and an airplane style bathroom, but the hotel was clean, efficient, and affordable. Couples and solo travelers will have more than enough room. If you are traveling with a big group or you want a bigger room, then you might want to look elsewhere in the city. Fish and chips from Kødbyens Fiskebar

Tired, but hungry, I knew I had to find something to eat before I fell asleep due to exhaustion. Luckily, with the help of Yelp, I discovered Kødbyens Fiskebar in the trendy Meatpacking district.

After a 15 minute walk from my hotel, and a couple wrong turns through the Meatpacking district, I finally reached the restaurant.

The restaurant had an upscale but casual ambiance with a warm and inviting interior.

As I was dining alone, I grabbed a seat at the bar. The extensive menu was full of raw seafood, oysters, fish, meats, and more.

I decided to go with the fish and chips (110 krone or about $16.21). The dish might have been a little expensive for the size, but the lightly smoked cod and hand cut potatoes were delicious and hot.

Warm food and a few cold Carlsberg beers was a perfect way to end my long day.

How to get from Copenhagen Airport to city center of Copenhagen

Day 2: Breakfast, sights, and fish and chips in Copenhagen